Junípero Serra: California, Indians, and the Transformation of a Missionary (Before Gold: California Under Spain and Mexico) por Rose Marie Beebe,Robert M. Senkewicz 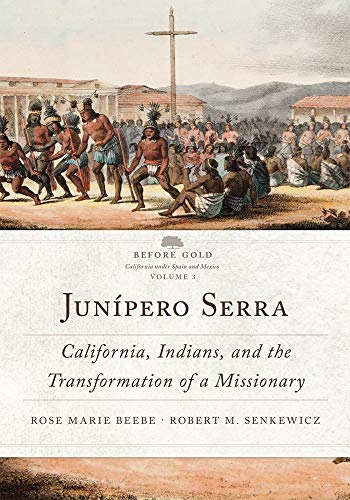 Rose Marie Beebe,Robert M. Senkewicz con Junípero Serra: California, Indians, and the Transformation of a Missionary (Before Gold: California Under Spain and Mexico)

Críticas ""Rose Marie Beebe and Robert M. Senkewicz have merged their new, living, and superb translations of Junípero Serra's extant writings with a penetrating narrative that reflects their long experience and interpretive gifts. The authors convey an understanding of Serra's life and times that is at once nuanced and broad-stroke, challenging mainstream opinion and bringing balance to the multiple controversies surrounding the Franciscan priest. Readers cannot help but reassess their preconceptions.""--Janet Fireman, author of The Spanish Royal Corps of Engineers in the Western Borderlands: Instrument of Bourbon Reform, 1764 to 1815""Making use of their own new translations of Fr. Junípero Serra's writings, Rose Marie Beebe and Robert Senkewicz have written an evenhanded account of Serra's life that pays particular attention to his relations with California Indians. A portrait of Serra in his own time, this book is must-reading for anyone interested in Serra, California Indians, and their complicated history.""--Albert L. Hurtado, author of John Sutter: A Life on the North American Frontier and Herbert Eugene Bolton: Historian of the American Borderlands Reseña del editor Franciscan missionary friar Junípero Serra (1713–1784), one of the most widely known and influential inhabitants of early California, embodied many of the ideas and practices that animated the Spanish presence in the Americas. In this definitive biography, translators and historians Rose Marie Beebe and Robert M. Senkewicz bring this complex figure to life and illuminate the Spanish period of California and the American Southwest. In Junípero Serra: California, Indians, and the Transformation of a Missionary, Beebe and Senkewicz focus on Serra’s religious identity and his relations with Native peoples. They intersperse their narrative with new and accessible translations of many of Serra’s letters and sermons, which allows his voice to be heard in a more direct and engaging fashion. Serra spent thirty-four years as a missionary to Indians in Mexico and California. He believed that paternalistic religious rule offered Indians a better life than their oppressive exploitation by colonial soldiers and settlers, which he deemed the only realistic alternative available to them at that time and place. Serra’s unswerving commitment to his vision embroiled him in frequent conflicts with California’s governors, soldiers, native peoples, and even his fellow missionaries. Yet because he prevailed often enough, he was able to place his unique stamp on the first years of California’s history. Beebe and Senkewicz interpret Junípero Serra neither as a saint nor as the personification of the Black Legend. They recount his life from his birth in a small farming village on Mallorca. They detail his experiences in central Mexico and Baja California, as well as the tumultuous fifteen years he spent as founder of the California missions. Serra’s Franciscan ideals are analyzed in their eighteenth-century context, which allows readers to understand more fully the differences and similarities between his world and ours. Combining history, culture, and linguistics, this new study conveys the power and nuance of Serra’s voice and, ultimately, his impact on history. Ver Descripción del producto